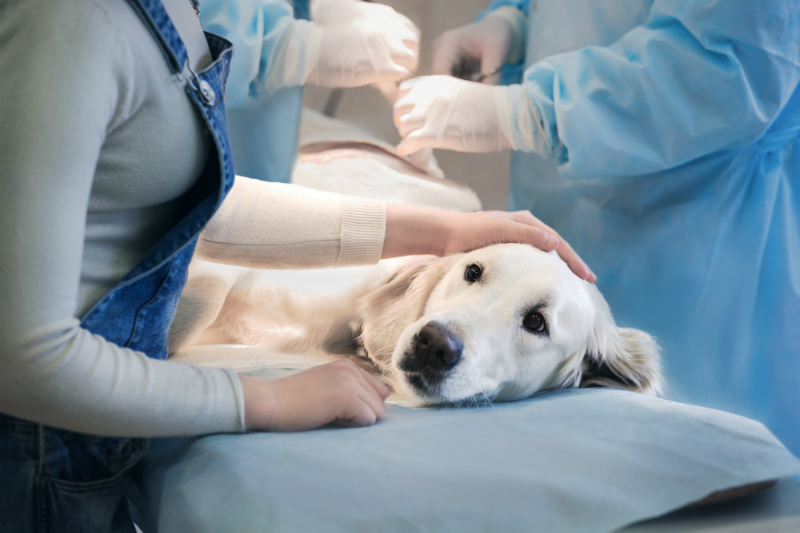 Remember in high school when you thought “I will never use this or need this again!” from your English or Math class? Well, sometimes us vets think this too as we pour through our books during vet school. Such was the case with “teratoma” – cancer that produces bone and hair. A great word for a game of Scrabble or to amaze select friends with strong stomachs, but I’ll never see this again. Let me tell you a story.

Recently we had a sweet young lab come into our clinic to be spayed. The rescue that she was from was going to spay (remove both ovaries and uterus) her but noticed a mass in her belly. We did an ultrasound, but could not make any definitive diagnosis or get a good grasp of how large/involved this mass was. We decided to go ahead with the spay, hoping that it wasn’t cancer and potentially could be easily removed. As our surgeon opened the abdominal cavity, we quickly found out the mass was large and extensive – so much so that our normally dexterous surgeon had to a make an extensive incision just to get around the mass! It was so big that it was squishing one of the kidneys and the liver. At first, we could not tell where it was coming from or what it was attached to. However, instead of giving up, our surgeon persisted and eventually found that this enormous mass was directly attached to one of the ovaries! We couldn’t believe it. The mass looked like an alien as the surgeon held and moved it around. After almost 2 hours, we were able to safely remove the mass and the other ovary and uterus. We warmed up our patient as she had lost quite a bit of blood due to such an extensive surgery. She was now almost 5 pounds lighter!

While we were monitoring the little dog’s recovery from anesthesia, we decided to open up the mass and see how it was organized. Our hospital also opted to take on the cost of sending the mass out for histopathology – sending multiple samples to a lab to be analyzed by a pathologist (someone who is specialized in analyzing body tissues). As we cut through the mass, a load of green goop poured out of a cyst-like structure. The more we cut, the more we were astonished to find bone and hair growing in this mass!!! This sent us all to our books and vet websites – we discovered that our mass was an ovarian teratoma: a once-in-a-lifetime occurrence! Our little patient continued to improve throughout the afternoon. She was discharged the next day to her new home and is continuing to do well at the time this article is being written.