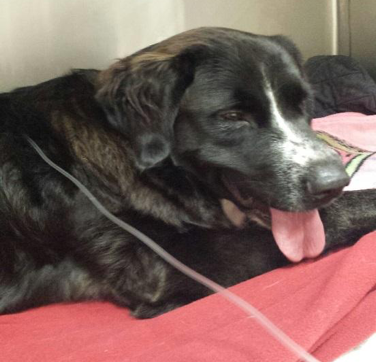 Meet Katie, my youngest dog. She is just recovering from a spay and a gastropexy. She is 1 year old. Her case highlights 2 hot topics in the veterinary/pet care world right now: At what age should we spay or neuter? and should we tack down their stomach at the same time?

Some background … Katie is 78 lbs. She is a mutt—her mom was a Lab X Shepherd and her dad was a St. Bernard X Mastiff. So, for me, that puts her into the ‘large breed’ category. That is important because studies about delaying a spay or neuter have been in larger breed dogs (Golden Retrievers, German Shepherds, Labrador Retrievers, Bernese Mountain Dogs to name a few). And we talk about a prophylactic gastropexy in dogs with deeper chests and breeds known to have a higher risk of gastric dilation and volvulus (GDV = bloat and a twisted stomach).

Let’s talk about the latter first. A gastropexy means tacking down the moveable part of the stomach to the right body wall so it can’t flip. GDV is a potentially life threatening emergency and can happen in any breed of dog but most often happens in bigger dogs. If a first degree relative has had a GDV then the risk is increased. At the time of spay or neuter, you can elect to have the stomach tacked down in order that it can not flip, though it could still bloat. Generally, there are few to no adverse effects to the procedure, but as with any procedure, there always carries a small risk.

On to a more contentious issue, when to spay or neuter? For years the veterinary profession has advocated 6 months old. This is old enough that it is not a pediatric procedure yet young enough that almost all dogs have not become sexually mature. It is an age that advocates for pet population control and for many dog owners dealing with an intact male or female is not necessarily what they have wanted to do or are especially good at.

Studies have started filtering in that are showing statistical differences in pets that have been neutered (the gender neutral term for spay and castration) at the recommended younger age versus waiting until they are older (studies differ but let’s say under 1 and over 2). Many, but not all, of these studies have found that dogs neutered at the recommended age of 6 months may have an increased risk of obesity, cranial cruciate rupture, diabetes (males), hip dysplasia, osteosarcoma (and possible a few other cancers), urinary incontinence (females). Neutering at 6 months of age carries a decreased risk of perineal hernia (male), benign prostatic diseases, male on male aggression, pyometra (females) and mammary cancer.
So now the waters are muddied with respect to what to recommend.

I can tell you that for Katie I had fully intended to let her have 1 heat, then spay. So that may have put her around 18-20 months of age. Why did I do it sooner? Well, I wanted it done. I felt my life was busy enough without having to manage a dog in heat and other dogs around her when she was in heat. I like to walk off leash and she is with me often. I do feel that recommendations have to take the whole picture into account—and that absolutely includes lifestyle and feasibility.

Stay tuned for further commentary as the ‘debate’ continues and please bring all your questions to your veterinarian!