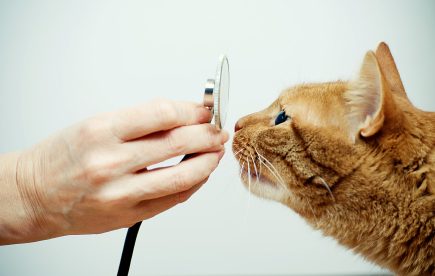 The nose seems like such a simple thing, and you probably don’t even notice that we are looking at it.

We are checking for a lot of things.   As they are growing, do they have stenotic nares, (a narrowing of the nasal passages that causes severe difficulty in breathing as they grow – certain breeds are predisposed to this)? Do they have any nasal discharge?  If it’s clear that’s cool.  If it’s not, that can mean infection, viral bacterial or foreign body, which leads to the next question; is it one-sided discharge or both?  Is the nose wet?  Dry? Cracked skin? Red/irritated? Does it still have that cobblestone appearance to the surface?  If not, it can mean something serious like autoimmune disorders.

There’s a lot of information in a nose besides wet kisses.

Ears carry a lot of information as well.  If they are clean and clear, we’re happy doctors.   If there’s redness, smell, or discharge, we need to be looking very closely at them.  We scope them and try to get all of the way to the eardrum to make sure it’s intact, but that’s not always possible.  Depending on the dog or cat and how cooperative they are, we can see right down and around the corner to the horizontal part of the ear canal and the ear drum.  If it’s super sore, that’s not always possible but we do our best.  How the animal holds it’s head and ears tells us a lot too.  Both with behavioural concerns and with such things as inner ear disease, often confused with strokes in dogs and cats.

They say that the eyes are the window to the soul.  I don’t know if that’s true but they do tell us a ton.

We look very closely at the eyes and surrounding area, and here’s just a few things we are looking at:

Are the pupils both the same size? Are they working (increasing and decreasing in size with the light?) If not, we are looking at the possibility of some very serious diseases.

Are there any color changes?  Is the white part of the eyeball still white or is it red?  Is there any discharge?  What color is the discharge?

Is the position of the eye normal?  Some forms of cancer start behind the eyeball causing a strange appearance as the eyeball starts to bulge.

Are the eyes stable? Some breeds like Siamese have a normal eye wobble (the eye wobbles back and forth when they look at you) but for others, it’s not normal and can indicate serious disease such as vestibular syndrome.

Going back to the behavior of the pet, there are some disease conditions that cause acute blindness and this is often not noticed by the pet owner, except by a sudden “quietness” about the pet.  There was recently a case where the cat was normal one night, jumping onto the bed and the counters like usual, but the next day wouldn’t move off of the couch.  The cat was noted to be blind upon physical examination.  Upon further examination, it was determined that it was due to a retinal detachment, secondary to kidney failure that had gone undetected by the owner.  Bloodwork confirmed the kidney disease, and while the cat is still not visual, the kidney disease is being treated and he’s feeling much better.  He’s even learning to get around the house now.  They just can’t move the coffee table….

Again, you may not notice as it often looks like we are just petting them, but when we feel underneath the chin, around the face and down the throat we are looking for some very specific things that can indicate serious disease if abnormal.

There are lymph nodes, which if enlarged can indicate infection or cancer.  In cats, we stretch their neck up a bit and feel on either side of the windpipe (trachea) for lumps that indicate a hyperactive thyroid gland.  We are also looking for other lumps and bumps, as well as checking to see if there is any sensitivity to the trachea.  If your pet coughs easily, we need to be looking further at the respiratory system or cardiovascular system for other problems.

So, this is just a brief overview of what we are looking for, and this is just the front part of the pet.  Think of all the information we’ll get from the rest of the body.  Read the next few blogs to find out!