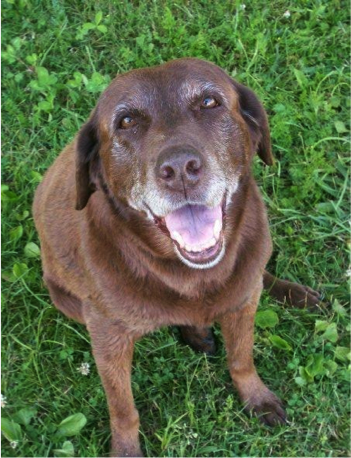 This is Zoey: Her Heartworm Story

She was a very sweet Chocolate Lab. She came to live with me in May of 2002 and began her new life at my home. As it turned out she was also starting her treatment. She was 6 years old and she had heartworm…  I would like to share her treatment and recovery with everyone. I hope it helps to inform and educate others of the disease.

Zoey was heavily burdened with heartworm. When the blood was drawn and placed on a slide there was a large amount of microfilaria, which is the immature heartworm. After a short wait we began her treatment. She received a series of injections that went directly into her lumbar (back) muscles. These injections could be very painful and it is very important that exercise is restricted drastically afterwards. Any overexertion can cause serious complications and even death to the animal being treated. Zoey was certainly no exception to this rule. She was to stay as quiet as possible until her heartworm treatment was completed. This is a long procedure and it was going to take months. Three days into her treatment she began to have a reaction and needed to be put on extra antibiotics and steroids. We rechecked her microfilaria test (checking for immature heartworm) on June 26, 2002, it was still positive. She still had heartworm. It was October of 2002 when the microfilaria test eventually came up negative. But the treatment was not going to be complete until her test for adult heartworm came up negative. On May 3, 2003 she was finally free and clear of her heartworm, but the disease had already taken its toll on her.

Shortly after her treatment began she was diagnosed with allergic pneumonitis which causes a chronic cough. She also began to show signs of congestive heart failure. Her cough would come and go over the next few years but her heart failure would only progress. For the years following her treatment she was maintained on multiple heart medications daily. She was put on Benazepril once daily to lower her blood pressure and ease the stress on her heart. Pimobendan was given twice daily to help improve the contractility of the heart allowing it to pump easier. Then Furosemide was given to reduce the fluid buildup around her heart and lungs.  Zoey continued on this daily routine for 6 years before her heart could no longer be helped and she unfortunately succumbed to her heart disease. She was 12 years old, and lived everyday of her life with me on medications.

My hope is, by sharing my personal experience people will understand how heartworm affects animals, why it is so important that we test our pets and, give preventions. We, as owners, have a responsibility to take care of our pets as they are unable to do it for themselves. Heartworm testing is a cheap insurance against a disease that is very sneaky in its onset. It’s the least we can do to keep our pets healthy, happy and disease free.