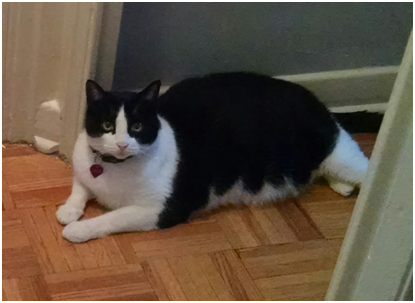 We are really excited to say that our 6 year old cat, Jack has lost 6 lbs after being on a weight loss program since the middle of last year. Last year I took Jack into Park Road Vet frustrated because I didn’t know what to do next about his weight. He had reached 21 lbs and after trying all different vet weight loss brands and natural food, nothing was helping. I, then, met with Amy at Park Road for a nutrition consult and she introduced us to a new brand of food, Purina OM (obese management). As well as the food, she gave me a list of all different tips on how we could help Jack lose weight. I wasn’t all too positive at first, because of nothing working in the past, but knew that we had to keep trying. Since then Jack has gone from 21 lbs to 15 lbs! While we know that the food has played a big role, we committed to following Amy’s guidelines on how else to help Jack’s weight loss, and just like humans we knew it would be a lifestyle change. Here are some of the things that helped Jack other than his food;

For all the other pet parents out there that went through what I did, just keep trying! It is so worth it to help your animal now rather than suffer the vet costs down the road. You just have to find out what works for your pet. Diet alone won’t be enough, you have to remember that cats are naturally on the go in the wild , and so when we domesticate them we have to provide them with opportunities to get their exercise indoors and use their minds. A big thank you to Park Road Vet and Amy, we have been going there for over 20 years and even after moving out of town, it is always well worth making the trip in. I appreciate all your smiling faces and for treating my animals like their my kids!  Better go now, Jack’s hungry. 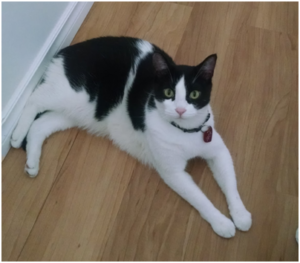