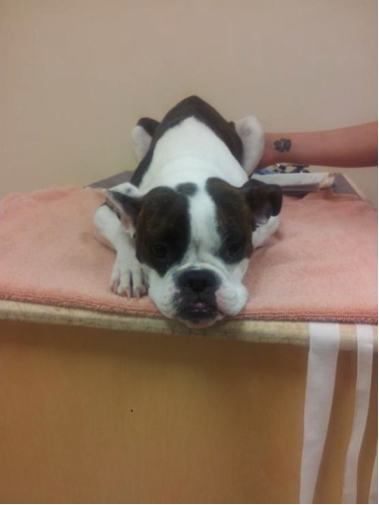 Meet Stella. This picture was taken after her sedation, just prior to her surgery. But first, her story…

Stella is a Boxer X Boston. She is 7 months old and is usually FULL OF BEANS!! Her family loves her and and her crazy antics!

At the end of July, Stella was her usual, crazy self and one of her wonderful and very attentive family members BRIEFLY dropped a chicken skewer. Chase ensued… a piece was rescued and a piece was not. Very worried Stella was rushed to the after hours clinic and an x-ray was taken. She was not vomiting, still eating and had not actually missed one beat. The x-ray did not really show anything to be alarmed about – but wood does not show up on x-ray so we look for other signs of alarm, like dilated loops of bowel, organs where they should not be, less detail suggesting free fluid in the abdomen.

That started over a month of frequent visits for Stella. At the initial visit we talked about performing an exploratory and spaying her at the same time. Unfortunately we talked ourselves out of that option.

The difficult part that although Stella was not her usual crazy self, she was not ever assessed as unstable or obstructed. She kept right on eating. Vomiting was not an issue. Her family remembered her yelping when she was picked up in a weird way and falling off a chair on the deck. When a lump showed up on her left side and an xray showed some changes on her ribs then a cracked rib made sense for all her vague clinical signs. Finally though, a few weeks later, Stella was trying hard to be a puppy and stole some food – the whole night she was uncomfortable. When she came back into Park Road she was even standing differently. Bloodwork at that time was consistent with an infection.

Stella went on antibiotics, got back to being herself mostly and we performed the surgery. Sure enough there was a 4 inch skewer in her stomach. It had poked a hole; that was the lump on her left side. Her stomach was adhered to her body wall and her body had walled off any leaking or abscess. As we (vets) tack a stomach to the body wall frequently in larger breed dogs it was decided to leave her stomach were it had found a home. The skewer was removed. She was spayed. She spent the night at the after hours clinic for continuing care and then went home. By the next day she was feeling SO MUCH BETTER! That week she was back to stealing anything she could get her mouth on… and the lump on her rib cage is basically gone!

So I see 2 morals from the Stella saga: 1. The pet’s family is usually always right. If they think there is something wrong, there usually is, I just have to figure out what it is.
2. An exploratory is an excellent diagnostic. We probably talk ourselves out of it far too often.

Seen here is a picture of the skewer we removed from Stella. 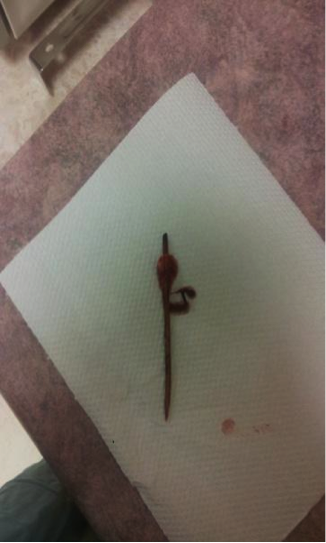 Here is the skewer we removed from Stella.